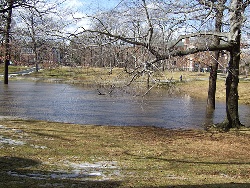 In the space bordered by S.W. Bowne Hall , Hoyt-Bowne Hall, and the Learning Center addition to the Rose Memorial Library, lies a deep circular declivity. Though the precise geological origins of this declivity have not been labelled, the poet Wordsworth would probably have been moved to describe it as a "dell." As per the Oxford English Dictionary's definition, a dell is "A deep natural hollow or vale of no great extent, the sides usually clothed with trees or foliage."

Depending on the ground-water level of the surrounding soil and the amount of recent rainfall, this declivity periodically fills to a greater or lesser extent; this phenomenon is known as "Tipple Pond." By extension, the entire area is often known as Tipple Pond even when dry. On most occasions, the depth and size of the pond is modest; however, the rising waters have been known to creep up over the walk through the center of campus and reach out toward the Seminary building and the Shakespeare Theatre. 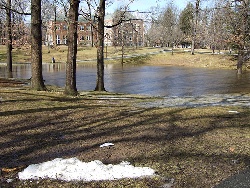 Early twentieth-century Theological students apparently bestowed President Tipple's name on this campus feature in allusion to Tipple's struggles with recurrent and severe allergies, according to John Cunningham, author of University in the Forest:
"President Tipple suffered so intensely from hay fever and asthma that each summer he journeyed afar seeking relief . . . Tipple's eyes ran constantly in hay fever season, a condition that evoked sympathy but prompted students to name a little pond near the gymnasium 'Tipple's Tears.'" (p. 139)

(Tipple, of course, can also mean strong drink, as well a place where things are 'tipped' or rolled.)

A Swim in Tipple Pond

Alumni, and Drew students of the twenty-first century, treasure memories of occasional stress-relieving swims, wading or ice-sliding experiences on the pond.

When snow is thick enough to blanket the ground, a continous small stream of undergraduates, graduate students and their children, and even occasional faculty, take advantage of the excellent slopes for sledding.

Courtesy of the Drew University Archives.