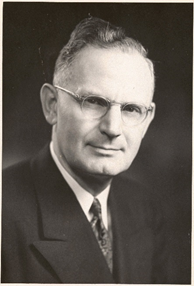 Clarence Tucker Craig (1895-1953) served as Chair of New Testament Studies and as the Dean of Drew Theological School from 1949 until his untimely passing in 1953. Previously, he was the Professor of the New Testament at the Yale Divinity School and the New Testament Chair at the Oberlin Graduate School of Theology. Craig was a highly regarded New Testament scholar who was a member of the New Testament and Apocrypha translation committee of the Revised Standard Version of the Bible. His last published work was the commentary on I Corinthians for the Interpreter’s Bible. Some of his notable books are The Beginning of Christianity, The Study of the New Testament, and We Have an Altar. Craig was active in the ecumenical movement with the World Council of Churches.

While his time at Drew Theological School was short, Craig personally oversaw the renovation of the chapel that would soon be named for him. Originally built in 1900, the chapel was never formally named. Following his passing, the chapel was dedicated as Craig Chapel on February 17, 1954.

The Clarence Tucker Craig Papers are comprised of four boxes and a faculty biography folder. The bulk of the collection includes sermons and lectures given by Craig between 1925 through 1953. All sermons and lectures are in alphabetical order. Notable inclusions include folders containing drafts of manuscripts such as The Beginnings of Christianity and Craig’s exegesis of I Corinthians. His work on the Revised Standard Version of the Bible is also included, with his translation of the apocryphal Book of Wisdom and related committee correspondence. His Ph.D dissertation, “The Influence of Apocalyptic Eschatology on the Ethics of Jesus,” is also included.

There is a complete inventory of papers in the first box, however years are not provided. Sermons and/or papers are largely kept in envelopes labeled with dates and other relevant information.

This is an unprocessed collection and may not be available for research. For more information, please contact speccol@drew.edu.