Also available as a PDF file.

Thomas Gibbons was born outside of Savannah, Georgia in 1757. During the Revolution, he remained a loyalist while other members of his family were patriots. When the war ended, the Gibbons family kept its large land holdings, and after some time, Thomas was granted clemency. He became a successful lawyer, a judge, and owner of several rice and cotton plantations, including the Mount Vernon estate, Shaftsbury, Mansfield, Fair Lawn, Orange Valley, White Hall, Moreland, Rose Dew and Tusculum. Gibbons entered politics as a campaign manager for General Anthony Wayne in a hotly contested congressional election. He himself served as mayor of Savannah in the years 1791-92, 1794-95, and 1799-1800, but he was often accused of unethical political tactics.
Around 1810, Gibbons purchased an estate in Elizabeth-town (now Elizabeth), New Jersey. He relocated his family and, in 1817, began to run steamboats between New York and New Jersey. He hired Cornelius Vanderbilt as the captain of one of his boats. After many legal battles (and a duel) involving exclusive rights on steamboat navigation between states, the case of Gibbons vs. Ogden went to the United States Supreme Court in 1824. Gibbons hired Daniel Webster as his lawyer, and he won in a famous verdict that declared steamboat monopolies null (i.e. exclusive rights to interstate navigation and commerce were illegal, and only Congress could regulate navigation when it involved trade). Thomas Gibbons died in New York in 1826. 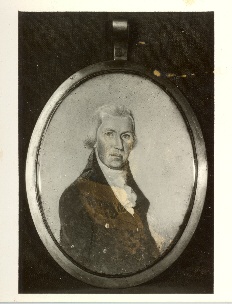 Thomas Gibbons and his wife, Ann Heyward, had three children. William Gibbons, the favored heir, withdrew from Princeton to become his father's business associate. Upon his father's death, William inherited the businesses and plantations (including more than 500 slaves). He sold the steamboats in 1829 and became involved in thoroughbred breeding and racing. In 1832, William bought nearly 1,000 acres in Bottle Hill (now Madison), New Jersey, where he built an antebellum style mansion (later known as Mead Hall of Drew University).
William Gibbons married Abigail Louise Taintor, with whom he had four children. Notably, daughter Sarah married Ward McAllister, writer and socialite. William Gibbons died in 1852. The only son, William Heyward, closed the mansion in the late 1850s and joined the Confederate Army during the Civil War. He lost much of the family fortune during the war and sold the Madison property in 1867 to Daniel Drew. William Heyward died in 1887.

The Gibbons Papers at Drew University is a voluminous archival collection. The bulk of the material was created by Thomas Gibbons and his son, William Gibbons. The records include daily correspondence, financial receipts and ledgers, letterbooks, journals, legal documents and court proceedings, and miscellaneous family-owned ephemera that spans 1782-1860s, the bulk of which covers 1810-1845. Most of the records are financial and legal documentation of the Gibbons' businesses, including plantation management, steamboats, and horse racing. Records of family life - including those on the family home in Madison, NJ - occur in the 1830s-1840s period.

In regard to the collection's provenance, evidence suggests that Drew librarian S.G. Ayres recovered the material from the attic of the family's mansion (now Mead Hall) around 1900. It has since been stored in the Drew University Library. Smaller donations have been accepted and added to the collection over the years, including some from descendents of Isabel Gibbons Lathrop.

**Items which do not fit in standard archival document boxes are housed in appropriate custom enclosures and are designated oversized in the finding aid as "*OVER-#." These items are shelved separately from the standard boxes.

Series *I.*Correspondence is divided into three subseries, reflecting three record creators: a) Thomas; b) William; c) William Heyward Gibbons. Letters are filed chronologically within each subseries. Exceptions occur in cases where the creator sewed a batch of letters together. Completely undated material is filed at the end of each subseries; in cases when only the year is known, the letter is placed at the end of that year's folder. Letters between father and son have been cross-referenced, with the original placed in the writer's file. In cases where a bulk of correspondence exists with one particular correspondent, the letters have been filed in a separate folder under that year.

Several sets of transcripts have been created over the years and are available for ease of reading. See Series VII. Secondary Research Materials/a. Research Correspondence, Notes, Transcripts.

A note on "major" subjects of the correspondence of William Gibbons.

Series II. Financial Records is divided into three subseries: a) Thomas and William Gibbons; b) Ann Heyward Gibbons (one item); c) William Heyward Gibbons (one folder). Thomas and William were both major creators of financial records. However, due to their father-son business partnership in which one often acted as agent for the other, especially in Thomas' last years, the records are sorted only by format - e.g., account book or account statement/receipt - and then by date (generally speaking, the year 1826 is the breaking point between Thomas' and William's records). Dates are determined by the author's docket on the document whenever possible. This arrangement seeks to reflect the nature of their business relationship and accommodates the bulk of material. Completely undated material is filed at the end of each subseries; in cases when only the year is known, the letter is placed at the end of that year's folder.

A change occurs in 1846, in which "House Accounts" are separated from William's general accounting, probably due to the hiring of Mrs. Ingraham, who handled a separate household account.

Series III. Notebook, Letterbooks, and Journal. This series contains 4 items, all described in the container listing to follow.

Series IV. Legal Documents is a broad category, separated into two subseries. Subseries A contains the earliest documents - indentures, land agreements, and deeds - in the collection, dated 1778-1810. Many are in very fragile condition, and some are damaged. Item-level processing in this subseries furthers preservation efforts and prevents unnecessary handling.

Subseries B contains: Acts/Legislative Documents, Business Agreements, Court Documents, Employment Agreements, Estate Documents, Horse Purchases and Pedigrees, Memorials/Petitions, Notes on legal cases, Pardons, and Rent/Lease Agreements*.* The Court Documents consist of juror lists, subpoenas, affidavits, injunctions, depositions, etc., which have been filed by case whenever possible. Within each folder, the documents have been filed chronologically to the extent that it is possible; many items are undated.

Series V. Court Proceedings and Litigation Pamphlets. All printed and sewn pamphlets. Some with signature of Thomas or William Gibbons on title page. Listed by title in chronological order. Each item is individually wrapped in acid-free paper and enclosed within an acid-free folder. In some cases, more than one copy of each title is available.

Series VI. Family Ephemera/Miscellaneous. This series contains miscellaneous material created by or owned by the Gibbons family. It is organized into four subseries: a) Manuscript documents; b) Printed documents; c) Books/Periodicals; d) Art (1 item). The manuscript and printed documents are further classified by subject matter. The books/periodicals are listed by title.

Series VII. Secondary Research Materials. This series contains only secondary source material that pertains to the Drew University Gibbons Papers or the Gibbons family in general. These records were created by researchers, writers and several Drew University Library staff members over the past 75 years. There are three subseries: a) Research notes/miscellaneous/transcripts; b) Publications; c) Photos. The research notes are further classified by subject matter. The publications are listed by title. The photos are organized by subject matter.

In the Drew University Archives: