This tour will describe the architecture and history of the building and some of the many functions of its various rooms. 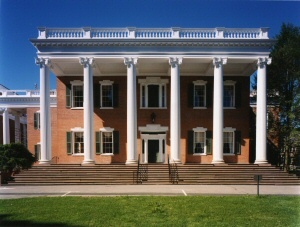 Image AddedIts imposing size (145′ x 90′) and impressive architectural features have earned Mead Hall an important place among New Jersey ‘s largest and finest Greek Revival-style houses. Along the main façade, a full-height portico is supported by six massive Ionic columns of fluted and carved wood, each 36 feet high. The brick walls of the house were once painted, probably in a light-gray color simulating stone. The paint was removed in 1958, to complement other redbrick buildings on the Drew Campus. (The Rose Memorial Library immediately east of Mead Hall was constructed in 1939, with many Greek Revival features that echo those of Mead Hall.)  At either end of the portico are brownstone mounting blocks, tangible reminders of William Gibbons’ interest in horses. The white-painted lintels incised with Greek-key designs that rest above the tall windows are of brownstone; originally, the stone was exposed. The portico floor retains its original gray marble tiles. The paneled wood front door, with its silver-plated hardware, is also original. Overall, the design of the T-shaped house hints of the southern origins of its builder, recalling the gracious proportions and high ceilings of antebellum plantation houses below the Mason-Dixon Line. 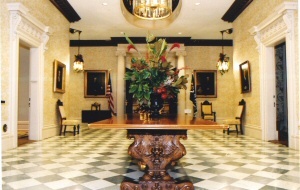 The grandeur of Mead Hall is expressed in the ample size of its T-shaped main hall. The gray-and-white marble tiles on the floor were removed, cleaned, and replaced during the 1989-1992 rehabilitation. Solid paneled doors of Santo Domingo mahogany survived the fire. They are fitted with silver plated hardware and doorknobs, which were deliberately darkened during Drew’s early seminary period to tone down the opulence of their effect. Evidence of the central furnace installed during the building’s construction can be seen in the circular brass grilles with adjustable openings in the lower walls of the hall. The hall’s ceiling cornice is of plaster painted a rich brown. Because of the great height of the ceiling, the cornice appears to match the mahogany doors. Like most of the plaster moldings in Mead Hall, the cornice was weakened beyond repair by water damage during the 1989 fire and was carefully replicated during the rehabilitation. In the center of the hall ceiling, an oval opening to the second floor is surrounded by a gallery-like mahogany balustrade and gives a glimpse of the skylight above. At the rear of the hall, the formal staircase, with its weighty urn-shaped mahogany balusters and shapely handrail, lends even greater importance to the hall. On either side of the entrance hall, original gilded mirrors hang above gilded console tables; they were salvaged and refinished after the fire. The wallpaper in this grand space is an adaptation of a historical pattern discovered behind the mirrors. Portraits on the walls are of presidents of Drew Theological Seminary and Drew University, as well as Daniel Drew and his wife, the former Roxanna Mead. A two-faced clock flanked by gilded consoles above the door at the rear of the hall is visible from both the hall and the dining room. 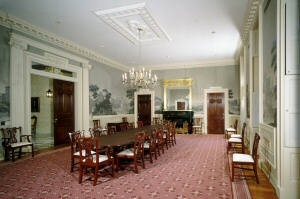 Above the entrance to the dining room, the Gibbons’ two-faced clock peers out to both the front and the rear of the house. The expansive dining room covers nearly the entire breadth of the building, with a butler’s pantry and service halls to the sides. On the south wall of the room, the sashes in the tall jib windows slide upward to create doors to the rear porch, where generations of Drew graduates have received their diplomas. The scenic wallpaper in this room was printed from 19th-century blocks by the Zuber firm of France and installed when the room was redecorated after the fire. Although it is not known how the walls of the dining room were treated originally, it seems likely that they were papered, as were most of the other rooms in Mead Hall.