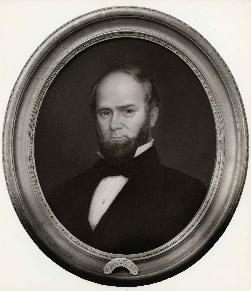 Nadal (1812-1870) was born in Talbot County, Maryland in 1812. He received his A.B. in two years from Dickinson College. During this time he won the good opinion of Professor John McClintock. He taught belles lettres at Indiana Asbury University (DePauw) before returning to the itinerancy. Nadal became professor of Historical Theology at Drew in 1867. He served as the immediate sucessor to President McClintock in 1870; however, he only served six months and only had the title of acting president. Nadal felt that Foster would be the wiser choice for president, "because Foster had more influence with Mr. Drew than any other man in the church and could secure further endowment as no one else could." Nadal died within a few months of his elected presidency and the presidency fell to Foster.

Abbreviated from The Teachers of Drew, 1867-942, A Commemorative Volume issued on the occasion of the 75th Anniversary of the Founding of Drew Theological Seminary, October 15, 1942. Edited by James Richard Joy. (Drew University, Madison, N.J., 1942).