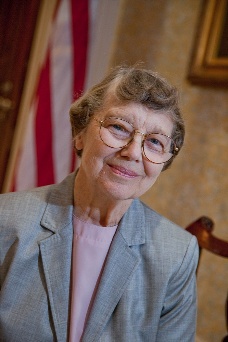 Dr. Vivian A. Bull became Drew University’s president for the interim term on July 1, 2012. She will be succeeded by Dr. Mary Anne Baenninger on July 21, 2014.

Before 1992, Dr. Bull taught for more than 30 years as a member of the economics department and served for eight years as associate dean of the College of Liberal Arts. She also directed the university’s Semester on the European Community in Brussels four times and served on a total of 21 Drew-led archaeological expeditions in the Middle East.

Dr. Bull received her doctorate from New York University and her bachelor’s degree from Albion College. She did graduate work at the London School of Economics on a Fulbright Scholarship and has studied in Norway, Great Britain and the Netherlands. She is the recipient of honorary degrees from the University of Portland, Drew University and Albion College.

Dr. Bull's academic speciality is in international economics with a specific focus on economic problems in the West Bank and Gaza. She served on the executive committee of the Northwest Association of Schools and Colleges (a regional accrediting organization) and on the board of directors of the National Association of Independent Colleges and Universities. She previously served on the board of Fred Meyer Inc. and the Fred Meyer Foundation, and the American National/Chemical Bank in NJ. She helped organize the College of Management and Administration of Africa University in Zimbabwe and is a former trustee of the university where she continues to serve as a consultant.

Dr. Bull is currently working with the Board of Higher Education and Ministry of the United Methodist Church, where she chairs the investment committee, serves with the University Senate and is working with a new international education project. She has served as as chair of the Board of Trustees of the Albright Institute for Archaeological Research (in Jerusalem) and as chair of the board of the local United Methodist Church.

A resident of Madison, NJ, Dr. Bull and her late husband Drew University Professor of Church History, Emeritus, Robert Bull  --who taught for 37 years at the Drew Theological School--, have two sons, Camper, a 1991 graduate of Drew’s College of Liberal Arts, and Carlson.