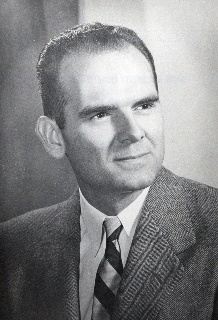 Carl Michalson, a prominent theologian, was Andrew V. Stout Professor of Systematic Theology at Drew University, where he taught from 1943 to 1965. He was a prolific author, editor, and translator. His tragic death in an airplane crash in 1965 was mourned throughout the international community of theologians and intellectuals.
Carl Donald Michalson, Jr. was born on June 29, 1915, in Waverly, Minnesota, to Carl Donald Michalson and Gertrude Leuzinger Michalson. After graduating from high school in 1932, a fateful intervention with the pastor of his church changed his path from completing a correspondence business course to attending John Fletcher College in University Park, Iowa, where he received a Bachelor of Arts degree in 1936. Later that year, Michalson began a Bachelor of Divinity degree at Drew Theological Seminary in Madison, New Jersey, working under his mentors Edwin Lewis and Lynn Harold Hough. He completed the degree in 1939, and followed with a Masters of Divinity in 1940 with a thesis titled Human Responsibility in the Republic of Plato and in the Synoptic Gospels. He pursued a doctoral degree at Yale University, where he studied under H. Richard Niebuhr and Robert Calhoun. He completed his dissertation, The Problem of Revelation and Reason in the Theology of Karl Heim, in 1945.

In 1943, Michalson returned to Drew University as an Instructor in the Drew Theological School. The following year he married Janet Aloyse Merrill, with whom he had two children, Karen in 1946 and Steven in 1949. In 1945 he became an Assistant Professor, and in 1951 an Associate Professor. In 1955 Michalson achieved full professorship as the successor to Edwin Lewis, and became the Andrew V. Stout Professor of Systematic Theology in 1959. While at Drew, “Dr. Mike,” as he was known among his students and colleagues, taught many courses, including: The Philosophical Backgrounds of Theology, Philosophical Anthropology, Theology for Persistent Questions, and Theology and Preaching. In coordination with his lectures and writings, Michalson frequently preached at churches and conferences.

Arguably, Michalson's most important research trip was to Japan in 1958 as a visiting lecturer at Tokyo Union Theological Seminary and Aoyama Gakuin University. The trip had a profound effect both on Michalson and on the Japanese Christian community. As Jun'ichi Asano said in The Journal of Christian Studies in 1966, “We cannot overestimate the stimuli he gave to Japanese Christianity through his lectures and sermons made at many schools and churches during his stay in Japan.” Michalson initially set out to learn what Japanese students already understood about Christian theology; after seeing the originality of their thoughts, he had colleagues and students orally translate Japanese theological books and articles into English while he took notes. The resulting book from Michalson's travels, Japanese Contributions to Christian Theology, was published in 1960 and offered rare insight into contemporary Japanese theology and philosophy.

Starting in 1956, Michalson wrote or edited six books in seven years and was praised for bringing modern psychological knowledge to bear upon classic theological problems. In 1956 he edited Christianity and the Existentialists. He wrote Faith for Personal Crises in 1958, with a Japanese translation in 1959, based on a series of articles that addressed the role of faith with the crises of anxiety, marriage, suffering and death, vocation, and doubt. In 1959, Michalson translated Friedrich Gogarten's The Reality of Faith to English. Analysis of faith and reason formed the foundation of two books, The Hinge of History in 1959 and The Rationality of Faith in 1963. Japanese Contributions to Christian Theology was published in 1960 as was The Witness of Kierkegaard, which Michalson edited. His final book, Worldly Theology: The Hermeneutical Focus on Historical Faith, was in the process of being typed by Michalson at the time of his death; it was published posthumously in 1967.

On November 8, 1965, Michalson was on his way to speak at a National Conference on Christian Education in Cincinnati, Ohio when the airplane crashed into a hill when trying to land in a storm. A colleague, Professor John Godsey, stated the importance of Dr. Michalson to Drew University and to the Christian Church when he declared that, “Probably no American theologian was more effective in interpreting the meaning of Christian faith to the growing masses of searching and bewildered college students than Carl Michalson.”

After his brother's death, Gordon Michalson published The Witness of Radical Faith, a collection of Carl's sermons, in 1974; many of his sermons are included in this collection. A year later, Gordon, former colleague Charles Courtney, and former student Olin Ivey wrote Hermeneutics and the Worldliness of Faith: A Festschrift in Memory of Carl Michalson. Also to honor his contributions, the Carl Michalson Society began in 1977, striving to fulfill Michalson's wish to provide Japanese students with scholarship money for Drew University, which was also echoed in the Michalson family's request at the funeral that those wishing to honor his memory tangibly contribute to scholarship aid for Japanese students at Drew University 's Theological School.

Carl Michalson remains a revered figure in the field of systematic theology. His work has been the topic of several theses and dissertations and his lessons and lectures remain an influence on all seminary students and theologians today.

A number of Dr. Michalson's lectures/sermons are available at the United Methodist Communications audio archive: http://audio.umc.org/