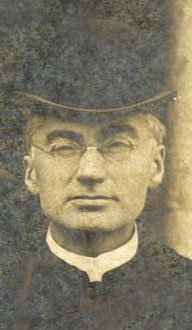 John Alfred Faulkner came to Drew in 1897 as professor of church history, having earned his A.B. at Acadia College and his B.D. at Drew. He was affectionately called "Uncle Johnny" by students. Faulkner died in 1931.

As a teacher, Dr. Faulkner was content to be accurate rather than inspiring. He had none of the parlor tricks of the popular lecturer. Dr. Faulkner lived to know. His library was his workshop, his castle, and his kingdom. His store of general learning in Church History was amazing. The Apostolic Age was to him the great age of Christianity. He studied deep into this period, and had strong convictions about it. He loved the Fathers, and gave some fine studies of chosen men. The literature on the Methodist Movement is richer because of his work.

In judging his theological position, one needs to know of his earlier days. When he was young, those in authority considered him more than a bit radical. Indeed, he once intimated that his appointment was questioned in some quarters, and heads were shaken. But age found him regarded as ultra-conservative in his theology. Not a subtle or profound thinker was he, perhaps, but graced with humility, courage, and faith, and rooted in a vast knowledge of fact, he held the faith once and for all delivered to the saints. The supernatural was no stumbling-block to him. Miracle needed not to be explaiend away, but accepted as revelation and defended.

Dr. Faulkner's personal religion was very personal indeed. There seemed to be between him and God a very intimate fellowship. This is the germ of truth under those anecdotes of his talks with the Almighty about the contents of the morning papers. God was very real to him, and we dare assert that he was precious to God.