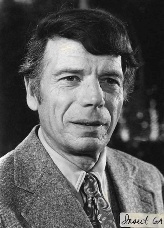 Lester W. Berenbroick, professor emeritus of sacred music, was active at Drew as a member of the faculty from 1952 to 1991. In addition to teaching popular courses on church music, he also served as director of both the theological and undergraduate choirs. While at Drew, he was simultaneously an organist for Christian and Jewish worship congregations in New Jersey and New York. After his retirement, he and his partner, Dr. Warren Crater T'59, became university benefactors whose generosity has enriched our community in many ways. In addition to endowing a scholarship in 2003, they together donated the pipe organ that is still in use today in the Craig Chapel, a gift that represents Professor Berenbroick's ongoing legacy of music education.
-- Contributed by Michael Bressman
Related entries: