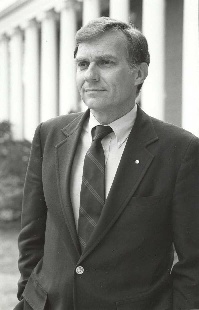 Paul Hardin (b. 1931) was the ninth president of Drew University. Hardin was a Phi Beta Kappa graduate from Duke University, where he also earned a law degree. He had been president of Wofford College and Southern Methodist University before being named Drew's president in 1974. A charismatic fundraiser, Hardin brought energy to his post. Among his legacies on campus are the United Methodist Church Archives Center, the remodeled Learning Center,  and the Research Institute for Scientists Emeriti (RISE) program. An initiative to provide a computer to first-year students also began under his tenure in 1984.  After 14 years as president, Hardin left Drew to become Chancellor of the University of North Carolina in Chapel Hill until his retirement in 1995. Hardin passed away in his home in Chapel Hill on July 1, 2017.  He was 86.