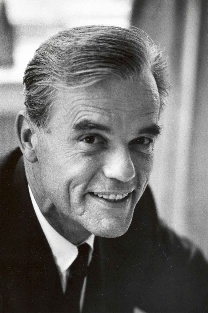 Dr. Robert Fisher Oxnam (1915-1974) served Drew University from 1961 to 1974 as the first lay person to hold the position of university president in Drew history. A native of Boston, Massachusetts, Oxnam was the son of Garfield Bromley Oxnam and Ruth Fisher Oxnam. Oxnam graduated from De Pauw University (Indiana) in 1937, then earned a master's degree in political science at the University of Southern California. He enlisted in the army and served in Europe as an infantry captain during World War II. He returned to USC to complete a second master's degree in public administration in 1947 and a doctorate in political science a year later.

While at USC, he served as an assistant director of public affairs and then went to Syracuse University ( New York ) in 1948 to be assistant dean of liberal arts, acting dean of the School of Speech and Dramatic Art, assistant professor of government, and assistant to the chancellor. In 1953, he filled a new post at Boston University as vice president for administration, and in 1958 became president of the Pratt Institute ( New York ). He was later honored by Syracuse University with a medal “for service to education and society.” He also received honorary degrees from the American University ( Washington, DC ), De Pauw University, West Virginia Wesleyan College, and Norwich University ( Vermont ).

A son of the late Bishop G. Bromley Oxnam, he was a leader in the United Methodist Church, holding memberships on the Executive Committee of the World Methodist Council, the Commission on the Structure of Methodism Overseas, and the Commission on Ecumenical Affairs, and the chairmanship of the Crusade Scholarship Committee. He was active in educational, international, and civic affairs, holding memberships in the American Society of Public Administration, the American Political Science Association, the American Academy of Political Science, the American Association of University Professors, and The Century Association of New York City. He was also president of the College-Federal Agency Council of the New York Region, U.S. Civil Service, and a director of the Greater New York Council for Foreign Service.

Oxnam left his mark during his tenure as Drew president. The enrollment rose from about 950 to 1,844, the number of buildings from 26 to 41, and the library budget from $100,000 to about $450,000. The University budget, balanced throughout his term in office, quadrupled from just over $2 million to about $8 ½ million. Dr. and Mrs. Oxnam frequently opened their home to student organizations, alumni groups, and visitors to the campus, including Martin Luther King, Madame Indira Ghandi, and Sir Muhammad Zafrulla Khan.

Under Oxnam's leadership, the College of Liberal Arts introduced a half-dozen off-campus and overseas programs, including semesters in Brussels and with the United Nations in New York. The Theological School developed innovative programs in continuing education, field work, and the professional doctorate, using outstanding clergy from the New York metropolitan area as adjunct faculty. Drew's public service role was also expanded during Oxnam's presidency by the formation of a division of special programs and continuing education for the general public and the offering of about 250 free public events annually, including major conferences on such matters as futuristics, regional planning, and the environment, and academic consultation on hermeneutics and civil religion. The New Jersey Shakespeare Festival and offices for the Arts Councils were relocated to Drew, the affiliation with the Colonial Symphony was continued, and the University received the New Jersey Drama Critics Association community service award for its support of the Festival.

As president, Oxnam spoke out strongly on behalf of civil rights, academic freedom, and an end to the war in Vietnam, even at times when these ideas were not especially popular among the general public. Faculty groups occasionally disagreed with him on various issues, but Oxnam received multiple tributes from students and faculty, praising his “humanity, vision and wise leadership,” and thanking him for “encouraging broader dialogue with students, opening avenues of discussion with trustees, establishing a fair and equitable judicial system,” and, through it all, “maintaining fairness and equanimity.”

Once the archery champion of both New York and Massachusetts, Oxnam was also an active skier, fencer, cyclist, and sail boating and scuba diving enthusiast, and served on the U.S. Olympic Committee from 1962 to 1966. He was a widely traveled student of international affairs and widely read student of history, a traveler, professional actor, amateur gardener and photographer, private pilot, radio announcer, carpenter and craftsman, Sunday School teacher, Parent-Teacher Association officer, and den father.

His resignation came suddenly after the discovery of a fatal malignancy during a hospital stay for the flu. Shortly after his departure in June, Oxnam was named Drew's first and only chancellor. He passed away on July 19, 1974.