The "rose" stained glass window, displayed over the entrance of the present Library building, was designed by Henry Holiday for Drew's first library, the Cornell, and installed in 1890. Below: the Cornell Library, with the round stained glass window on the back wall. The first photo was probably taken around the turn of the century; the second in the 1920s. 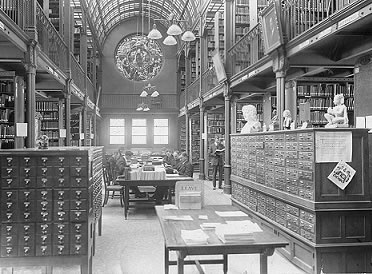 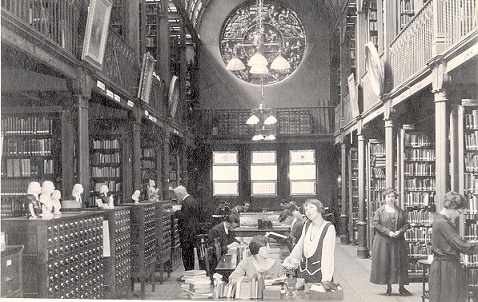 The Cornell Library was razed in 1937 when the Rose Memorial Library was constructed on the site; the window was removed at that time and placed in storage for over forty years. No formal records were kept of its whereabouts. As a result, the window was never installed in the Rose Library!

In 1978, when plans to add a Learning Center to the Rose Memorial Library were almost finished, the dismantled window was unexpectedly rediscovered in a crate in the attic of the Hall of Sciences. It was decided that the window should be restored to a place over the library's new entrance.

Gordon Henderson, a stained glass craftsman, reconstructed the window with the help of his son Todd. Because there was no original copy of the design, it took six months to piece together the small stained glass parcels. Henderson's great grandfather had restored stained glass windows in the Graduate School Building named after Samuel W. Bowne, back when the University was still a seminary.

"Rose" is the term used to describe a round cathedral or church stained glass window whose design emanates from the center, like the flower after which it is named. "Rose" windows are usual symmetrical in design, which Drew Library's is not, but the association with Rose Library has caused the name "Rose Window" to stick. The window has a nine and a half foot diameter. A letter from Henry Holiday, dated April 20, 1888 (Drew University Archives), gives a fascinating explanation of its symbolism:

In the center is seated Theology ("Knowledge of God") as the focus of all knowledge. The globe upon which she is seated symbolizes her domain, and the nimbus around her head indicates her spiritual character. The dove in the panel that rests on her shoulder symbolizes the voice of God, and the two seraphs, angels who symbolize "Wisdom," kneel before her. The motto for this central panel is taken from Isaiah 55:9: "As the heavens are exalted from the earth, so are my ways exalted from your ways." 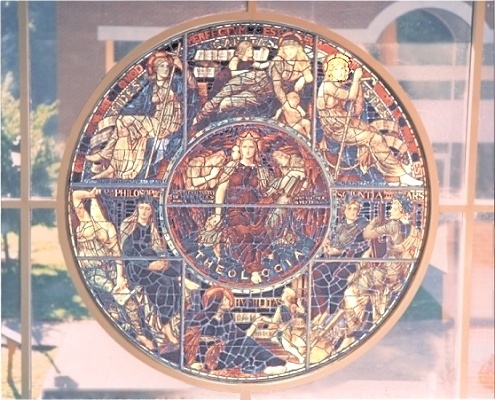 At the feet of Theology sits another female figure, Humility, leading a child towards Theology. The motto for this panel is taken from Psalms 25:9: "He shall teach the lowly his ways."

Above the figure of Theology are the three cardinal virtues: Faith (Fides) on the left, Charity (Caritas) in the center and Hope (Spes) on the right. Faith's text is from Hebrews 11:3: "By faith we understand that the ages were fashioned by the word of God." The text for Charity is taken from the first letter of John, chapter four, verse seven: "Qui diligit ex Deo natus est et cognoscit Deum." ("The one who loves is born from God and knows God.") Hope's text is taken from Romans 8:25: "If what we do not see we hope for, we await it in patience."

At the sides of Theology are two panels. The one on the left is composed of philosophy (Philosophia), reflective, with her foot on a pile of books symbolizing knowledge. History (Historia) lifts a veil to symbolize her "retrospective search." She was almost omitted, but Holiday included her "because we study the relation of God to Man through his dealings with mankind."

On the right side of the central panel is another figure Holiday had some trouble with, Science (Scientia), but he felt that her presence symbolized the study of the structure of God's universe, and represented her interests by a globe (earth science), a flower (Botany), and a book (theoretical sciences). Art (Ars) accompanies Science because she symbolizes the beauty of the ordered universe.