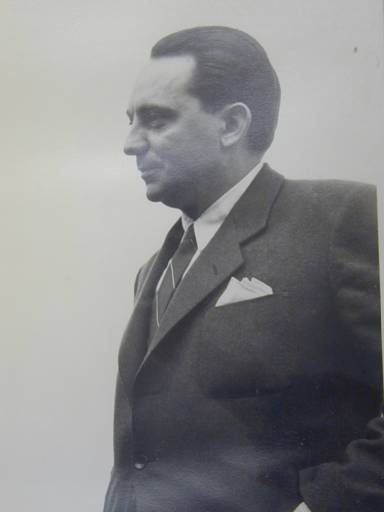 Abstract
Bela Kornitzer was a Hungarian-born journalist who documented the lives of prominent American men during the middle of the twentieth-century. After fleeing both the Nazis and the Communists in Hungary , Kornitzer left his established career as a journalist and came to America in 1947. The Bela Kornitzer Papers document both Kornitzer's struggle to gain recognition as an influential journalist and his interest in the success stories of his fellow Americans. These papers include correspondence, manuscripts, audio and transcribed interviews, newspapers, magazines and photographs that document both the affairs of Kornitzer and his subjects.

Bela (Bay-la) Kornitzer was born in Szerencs , Hungary on November 28, 1910. He was one of nine children, with five brothers and three sisters. According to a biographical form filled out by Kornitzer, he never graduated from high school, although all five of his brothers went on to receive University degrees. At the age of 16, Kornitzer saw a future for himself as an artist, a career not encouraged by his father. In order to pursue his dream, he left home for Budapest , where he began his career as a journalist. His early publications were sketches and brief commentary of prominent men, which appeared in the city's major newspaper. An editor at the paper, more impressed with his writing, advised him to pursue journalism. Kornitzer went on to become the reporter-commentator in the Hungarian parliament for about a decade.

In Hungary , Kornitzer made a career of interviewing prominent men. In 1940 he compiled his many interviews as a two-volume book, Fathers & Sons, which became a standard textbook in Hungarian schools until the Nazis took control of the government and ordered it burned. Kornitzer, along with his book, was on the most-wanted list of the Gestapo. During the Nazi occupation, he sought protection for himself and for one hundred families under Cardinal Angelo Rotta, Papal Nuncio of Hungary. Kornitzer has been credited with saving the lives of these families.

In 1947 Kornitzer became a high official in the post-war Hungarian cabinet as assistant to the Minister of Public Supply. Shortly thereafter, the Communists charged that his writings “strengthened the forces of rebellion”; this charge resulted in Kornitzer being ousted from office. When the Supreme Court cleared him of the Communist charges, the presiding judge stated that although Kornitzer's books opposed Communism and Fascism they “contributed to the preservation of true democracy and liberalism in prewar, semi-feudal Hungary .” The Court ruled that his books be stricken from the list of “Reactionary Publications.” Kornitzer was the first Hungarian official to seek exile in the US after World War II. He said, “I want to say that my coming to this country was sort of foresight on my part because I realized that sooner or later the situation would deteriorate instead of improve.”

“When I came to America in '47 I realized that the best way of learning about a nation is to talk to the people on their home ground when they are in their slippers and you can get the unaffected personality, the way he really is and not the carbon cliché of the press agents. So I did.” Kornitzer did so by focusing on the father/son dynamic and the American home life in order to get a different and new understanding about America 's leaders.

Throughout his self-made career, Kornitzer managed to secure interviews with the most prominent men of his time. Fulfilling the American dream, Kornitzer came to this country with nothing and achieved all he set out to accomplish. Not fluent in English, Kornitzer developed his knowledge of the language by visiting movie theaters. One day, determined to reestablish himself as a journalist, he borrowed money from a friend and paid a visit to Joseph Pulitzer in St. Louis (the Pulitzers were of Hungarian ancestry). Kornitzer explained his situation to Mr. Pulitzer and requested assistance for help with his new book. “I told Mr. Pulitzer I wanted to write a book about American democracy in terms of its people – its fathers and sons. I mentioned some of the people I intended to include in my study – Truman, Barkley, Einstein …” Mr. Pulitzer, sympathetic to Kornitzer's plight and determination, provided him with a letter of recommendation to Summer Welles, which aided in the eventual publication of AmericanFathers & Sons (1952).

Kornitzer next chose to explore the history of the Eisenhower family, especially due to the individual successes of each of the five brothers, which became The Great American Heritage: The Story of the Five Eisenhower Brothers (1955). Kornitzer believed that the framework for the success of American democracy was best represented in the dynamic of the American family, such as the Eisenhowers, because the family unit functioned as a miniature democratic state. Kornitzer's attraction to this dynamic, the pull between authority and family, and his penchant for writing, allowed him to create great journalistic works.

In The Real Nixon, (1960) his only book to focus on one individual, Richard Nixon, the father/son dynamic played a less prominent role. Instead, this book served as a true biography, tracing the events that lead to Richard Nixon's national prominence. Kornitzer spent a significant amount of time researching Nixon's past by paying visits to Nixon's home town of Yorba Linda , California and interviewing Mrs. Hannah Nixon and the locals with personal ties to the young politician. Kornitzer's objective was to demonstrate how American democracy begins at home with the values and ideals that are instilled by the family, and how these values contributed to America 's heritage.

In further pursuit of his vision, Kornitzer went on to write As the Twig is Bent. This unfinished work is a compilation of interviews of various prominent men, with a format similar to his original works on fathers and sons. In part inspired by the success of his televised interview with Robert Frost, Kornitzer pursued national figures such as Cardinal Cushing, Billy Graham and Douglas MacArthur. The Robert Frost television interview did not exclusively focus in on Frost's relationship with his father, but addressed Frost's poetry and his views on America and democracy. The interview was said to have been a success for bringing educational material into the home through the medium of television. Notes within the collection indicate that Kornitzer hoped to develop a televised series based on a similar format, and that As the Twig is Bent was created for this purpose. Unfortunately, this plan never came to fruition. Kornitzer died of sudden illness on November 22, 1964.

The Bela Kornitzer Papers document Kornitzer's interest in the American family, particularly the father/son relationship, during the middle of the twentieth century. Kornitzer focused his reporting on the fathers and the sons of prominent American men. The materials were primarily generated in the United States , but were also products of Brazil, Israel, Hungary , Japan , and other countries. Topics include Democracy, Fathers and Sons, Politics, America, Family, and Religion.

Access
The Bela Kornitzer Papers are open for research.

Restrictions on Use and Copyright Information
One photocopy may be made of each document for the purpose of research. Permission to publish must be obtained from the Drew University Archivist. Researcher responsible for further copyright restrictions.

Provenance and Acquisition
The Bela Kornitzer Papers were donated to Drew University by his sister, Alicia Kornitzer Karpati.

Sources Used
Walking in the Shadow of Tyranny, A Memoir by Alicia Kornitzer Karpati.

Series Description:
The American Fathers & Sons series contains items created or collected by Bela Kornitzer during the research for his first American book, which focused on father-son relationships of prominent American men. This series includes correspondence with extended family members, personal assistants, or coworkers, newspaper and magazine articles, and ephemera.

Series 2:The Great American Heritage: The Story of the Five Eisenhower Brothers,1942-1964

Series Description
The Great American Heritage: The Story of the Five Eisenhower Brothers series consists of all documents pertaining to the creation of the published book, also known as One American Family. This series includes correspondence with all five Eisenhower brothers, their parents, and associates. Transcribed interviews with these individuals are included, along with newspaper and magazine articles pertaining to family members and family affairs.

Corresponding photographs and scrapbooks are located in Series 5 and 7, respectively.

Series Description
The As the Twig Bent series is the unpublished manuscript written by Kornitzer, which further explores the father/son theme as it is expressed through different American icons. These papers document Kornitzer's research of his chosen subjects, and include correspondence, interviews, notes, ephemera and article clippings on the subjects such as Lyndon Baines Johnson, Cardinal Cushing, Barry Goldwater, Billy Graham, Douglas Mac Arthur and the Kennedys.

Series Description
The Profiles series consists of research, correspondence, articles, and questions and interviews that address subjects not featured in any of the published works or the unpublished manuscript. The subjects and subject areas include prominent political and business figures of America , as well as other countries such as Argentina , Brazil and Hungary . Some correspondence regarding Kornitzer's personal and financial affairs are also included.

Series Description
The Biographical Information series includes personal information about Kornitzer and his career, such as personal correspondence and notes, drawings, and interviews with Kornitzer as the subject. These papers also contain essays written by Kornitzer, brief autobiographical sketches, and his original Certificate of Naturalization.

Arrangement
Arranged according to format.

Series Description
The Photographs and Posters series is comprised primarily of photographs acquired by Kornitzer from the families of his subjects. Other photographs are of both Kornitzer and subject, taken at the time of an interview. Personal photographs also included. There are six folders of negatives, some of which correspond to the printed photographs in preceding boxes. This series includes several oversized posters depicting political campaigns and Kornitzer's book releases. Additionally, a framed painting of John F. Kennedy is included.

Arrangement
Arranged according to Kornitzer's original order of groupings by subject. All undocumented or unidentifiable photographs are grouped in miscellaneous.

Series Description
The Audio and Film Recordings series consists primarily of audio recordings of interviews Bela Kornitzer conducted with his subjects and are reel to reels, cassette tapes, and record albums. All but two of the audio cassettes, that of Alicia Karpati and Cadet Kirk, are copies of the reel to reel recordings. The film recordings are of General Douglas Mac Arthur and of Robert Frost. The Robert Frost film recording is a copy of the “At Home With Robert Frost” televised interview conducted by Bela Kornitzer and broadcast on NBC. Some of these interviews have been transcribed and can be found by subject name in Series 1-4. Not all of the interviews have been transcribed, and accordingly not all of the interviews on paper are transcriptions of these audio recordings. Also included are several miscellaneous commercial record albums purchased by Kornitzer featuring audio essays and interviews on some of subjects contained within this collection.

Arrangement
Arranged by format then alphabetically by subject.

Series Description
The Scrapbooks series contain several scrapbooks compiled by Kornitzer pertaining to the Eisenhower family, The Great American Heritage, and Fathers & Sons. These scrapbooks contain mostly photographs and newspaper clippings, along with some letters and postcards.

Arrangement
Arranged according to subject and size.