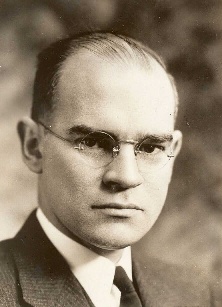 Fred Garrigus Holloway (1898-1988) was the seventh president of Drew University and served from 1948-1960. He graduated from Western Maryland College in 1918 and received a B.A. from Drew in 1921. Holloway had been both professor of Biblical languages and president at Westminster Theological Seminary, as well as president of Western Maryland College, before being chosen as dean of the Drew Theological Seminary in 1947. Just one year later, upon President Ayres Brown's retirement, Holloway was offered the presidency. Renovating and rebuilding the antiquated campus, a goal for two previous presidents, is Holloway's greatest legacy. New buildings, such as the Baldwin Gymnasium and numerous dormitories, appeared under his direction. A graduate study curriculum was also initiated. Like some of his predecessors, Holloway was elected a Bishop and assigned to West Virginia in 1960.