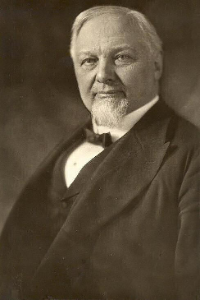 Henry Anson Buttz (1835-1920) was the fourth president of Drew Theological Seminary, later Drew University. Buttz attended the College of New Jersey (now Princeton University), where he attained an A.B. in 1858 and an M.A. in 1861. He preached at the Morristown Methodist church until he came to Drew in 1868, where he was soon named professor of Greek and New Testament exegesis. Buttz was one of "the Great Five" revered professors who led Drew for decades. Upon President Hurst's departure in 1880, Buttz was elected to the seminary's presidency. For thirty-two years, Buttz guided a superior faculty and an ever-growing student body. Although he resigned the presidency to a younger generation in 1912, Buttz continued as professor until 1918.
Courtesy of the Drew University Archives