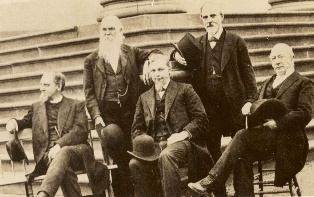 were "the pride and boast of Drew" in their day, and widely credited with shaping the institution and its students. Certainly, alumni of the Seminary remembered them with a great deal of fondness and enthusiasm

The following words on the Big Five, as they were called, come from The Teachers of Drew, 1867-1942, edited by James Richard Joy, Drew University, 1942:

"It would be difficult to describe the collective impression which they made upon the young men who studied here. But that they did make a collective impression both on and off the campus cannot be gainsaid. Except for Dr. Buttz, who spanned the gap between the founders and the modern age, they represented much the same type of theological thinking. Together they had come through the same periods of stress and strain regarding biblical criticism, natural science, evolution and the like, and had not dragged their anchors. For that reason there were those who tended to regard Drew in those years as a fortress of conservatives, as perhaps it was, though never a center of militant 'fundamentalism.' Men like Crooks and Buttz were too broad in their culture and too clear-eyed in the their mental vision to be absolutely fettered by the past, however reluctant they may have been to admit that, there might be a modicum of truth in the new views. Probably in the later years of their reign the faculty which was the pride and boast of Drew was rated in some quarters as 'the Five Old Men,' . . . But the young men on the Drew Campus looked up to their teachers with honor, reverence, and even awe. Personality, character, flavor, all ripened by long years of acquaintance with men and books, gave these men a prestige such as few members of any faculty have ever enjoyed. Men came away from Drew with their minds stretched by reason of 'Uncle John' Miley's arguments. They spiced their sermons with 'Uncle Sammy' Upham's witty comments on human foibles; they worked harder on their sermons because they had seen what prodigies of learning a worker like James Strong could acquire and put to use; Dr. Crooks touched every subject in a dull curriculum with live; and Dr. Buttz-- well, he was just Henry Anson Buttz, for whom the title of "Saint John" did not seem an exaggeration. They felt, as a rule, that association with this remarkable cluster of men was a tonic for their souls and minds." (p. 18-19)