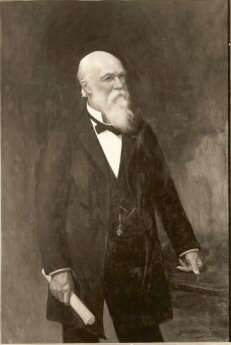 James Strong was a Methodist layman who argued for formal ministerial training and the establishment of a major Methodist seminary in the mid-Atlantic region prior to Drew's founding. He studied at Wesleyan, attained three degrees, and became acting president of Troy University before joining the faculty of Drew as chair of exegetical theology in 1868. Strong was one of "the Great Five" revered professors who led Drew for decades. In 1884, he produced the Strong's Concordance Bible, which is still in print today. He died in 1893, after serving Drew for nearly twenty-five years.

James Strong was the first full professor of the "Big Five"-Strong, Crooks, Upham, Miley, and Buttz-who for nearly a quarter of a century constituted Drew's famous team of teachers, and in some respects he was unique among his able and brilliant colleagues, since he was a layman among ministers. In fact he had commenced to study medicine before he took up "the theological languages." Even after he had graduated valedictorian at Wesleyan University in 1844 he had organized a railroad company and built the line; had been mayor of his home town on Long Island, and had taught Biblical literature and been acting president of the short-lived Troy University.

But John McClintock recognized a scholar when he saw him, and when in 1868 John Wesley Lindsay of Genesee Wesleyan Seminary decided his election to the chair of Exegetical Theology in the Drew set-up, he offered it to this versatile layman. It was no leap in the dark. He had already measured Strong's caliber and worked with him as joint-editor of the monumental Cyclopedia of Biblical, Theological and Ecclesiastical Literature, better known was "McClintock and Strong." (In fact the senior editor's untimely death left the major part of the burden of that vast undertaking on the competent shoulders of his partner.) In Drew Seminary Dr. Strong had found his element. As Dr. J. M. Buckley once said of him, "He knew something about everything and he knew everything about the things he gave himself to." He gave everything to his job of knowing the Scriptures and opening their content to the young men in his classes.

In some respects, the creation of Drew Theological Seminary is largely due to Strong. Fifteen years before he came to Drew a powerful article from his pen had appeared in The Christian Advocate of Dec. 22, 1853, on the imperative need of a training school for Methodist preachers in the vicinity of New York City. This was before Garrett and Boston had come into being, and at a time when the tide of Methodist opinion set strongly against such blasphemous innovations as would seem to substitute "man-made" preachers for "God-made" itinerants like Francis Asbury, Jesse Lee and Peter Cartwright. The editor, Dr. Bond, was sharply rebuked by many correspondents for admitting such a corrupting article to his columns; and one writer sought to break its force by ridicule, suggesting that the proposed school be named "Central Salvation Seminary," and that one teacher should have the degree of "P.P.R."-professor of Plenty of Religion.

But Dr. Strong laughed last! He not only lived to see the school established along the lines which he had laid down, but he enjoyed the supreme satisfaction of being a part of it and contributing to it of his own extraordinary enthusiasm and abundant learning. His achievements enhanced its reputation from the first. In those days American Methodist scholarship was under suspicion. The older churches, not too friendly to this upstart sect, were inclined to view its literary productions somewhat as the English of an earlier day had regarded all literature of the New World. "Who reads an American book!" might have had an echo here in "Who values a Methodist book?" So, when the Harpers (a good Methodist house in those days) published the great Cyclopedia, bearing the names of two Methodists, it must have been a shock to some people in Cambridge, Princeton and New Haven to learn that its compilers, John McClintock and James Strong, were both professors in the infant Methodist seminary in New Jersey which Daniel Drew had set up-a Nazareth out of which no good thing could be expected to come.

And in that procreant brain of James Strong another great idea was germinating. He would compile a Biblical Concordance which should displace all other concordances, even Alexander Cruden's masterpiece. It should contain every occurrence of every word in the English Scriptures, not excepting adverbs, prepositions and articles, even down to "a," "an" and "the." Furthermore, it should enable the student, however unskilled in the Biblical tongues, to identify the Hebrew or Greek original of each English word, and to know its pronunciation and its definition. It should be absolutely exhaustive, as its name Strong's Exhaustive Concordance implies, and such it must forever remain as long as the Holy Book is read and studied.

This is James Strong's monument. It tells of his inventive faculty, his organizing mind, his boundless energy, and his capacity for unremitting toil. "At night in his library," says Dr. Buckley, "he worked like a plow-horse, but in the lecture room he was as frisky as a colt. No one every went to sleep in his classes unless he was out of health or an imbecile." Indeed he was so full of matter on every subject that wily students were known to take advantage of his eagerness to impart information. Early in a recitation period some one would innocently ask a question which would set the professor off on an excursion which not only afforded immediate interest and information, but which consumed time that he might otherwise have employed in asking awkward questions of students who were inadequately prepared with answers.

Outside of his special field-the Bible, its languages, literature and lands-he indulged several minor interests, notably hymnology, on which he was probably the first to lecture at Drew. He traveled much in Europe and the Holy Land. His publications were numerous, beside the _Cyclopedia and the_ Concordance, by which he will be longest remembered. Nor was he wholly a bookman. He lived in no ivory tower. He took an active part in reform movements in the denomination. With his friend Dr. Crooks he worked with energy and persistence as a leader in the movement to win for Methodist laymen a voice in the government of the church. And when victory was won and laymen took their seats in the General Conference of 1872, the Newark Conference elected him as one of its first lay delegates.

Such was the second member of the "Big Five," a link between the founders and the builders of Drew. Enthusiastic, scholarly, vivacious, industrious, a personality which no student could ever forget, a man of letters whose name will be known as long as interest in the English Bible endures.

Physically Dr. Strong was above medium stature, which a well-knit frame. His movements were agile and graceful. His countenance was pleasing, though for the most part concealed by an abundant growth of silky hair, which in his later years was a long beard, wavy, somewhat forked and snow-white. A picturesque and arresting personality.