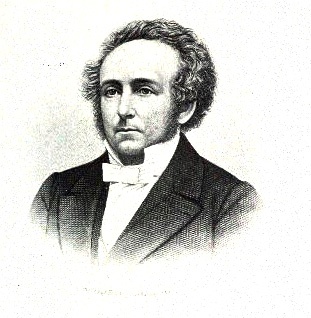 John McClintock (1814-1870) was the first president of Drew Theological Seminary, later Drew University, and served the institution as both president and professor of practical theology from 1867 until his death in 1870.

The Reverent John McClintock was but 53 years old when Daniel Drew named him for the presidency of the seminary. Yet he was very near his end. For twenty years he had scarcely known a well day. Ill health had forced him to leave Wesleyan University early in freshman year, never to return. A tremendous worker, he accomplished four years work in three at the University of Pennsylvania, in his native Philadelphia. He began preaching, but a bad throat choked that effort, and he took to teaching at Dickinson, mathematics at first, later the classics. Still toiling, it is said that the light in his window burned later than that in any student's room.

The inspiring Durbin was president of the college. His fellow-townsman George R. Crooks was a professor, and then or soon after, a slight flaxen-haired youth from the Eastern Shore of Maryland named John Fletcher Hurst would matriculate - a lad o' pairts! All four of these Dickinsonians were destined to shine on the roll of the teachers of Drew.

When President Olin of Wesleyan died, the chair was offered to McClintock, but he preferred the call to the editorship of The Methodist Review, a post which he held with distinction for eight years. It was then that he embarked on the ambitious project, hitherto attempted by no one outside of Germany, to compile a Cyclopedia of Biblical, Theological and Ecclesiastical Literature. For this task he discovered and called to his aid one James STrong, another name for the future Drew to conjure by.

When in 1852 he became pastor of St. Paul's Church, at 22d St. and Fourth Ave., New York, he found among the pewholders a well-to-do family of Wendels and a certain rugged and adventurous Wall Street operator named Daniel Drew. You see what was preparing!

His next move was to Paris, where he could work on his Cyclopedia in the Biblioteque Nationale, while serving the American Chapel as pastor. The Civil War broke, and the liberty-loving pastor rallied the American Colony for the Union cause, while by visitation and by correspondence with leading Wesleyans across the Channel, he helped to counteract the Tory propaganda of The Times. Always over-working to the point of collapse, we find him writing to America in 1863, "When we return it must be to the quiet of a retired place, where I may be allowed to do some service to the Church with my pen." But when he returned it was to resume the pulpit of St. Paul's.

And so to Drew! For in the Methodist Centenary Celebration of 1866, of whose Central Committee he was the leading member, one of the main financial objectives was made the strengthening of institutions for the training of young men for the ministry. Mr. Daniel Drew came forward promptly with his offer to build, equip and endow a theological seminary in the vicinity of New York City. One fundamental stipulation he laid down was that his pastor should be president. From that day until his death three years later, Dr. McClintock had but one object in life, to build the school sure and strong on this foundation. Himself a thorough scholar, he laid out courses of study wisely designed to meet the special requirements of the Methodist ministry.

He surrounded himself on the faculty with men whose character and attainments were personally known to him. His purchasing agent in Europe was furnished with lists of books which should form the nucleus of the library. One who visited Madison at that time brought back word that he found the president looking after every detail, from the examination of candidates for admission to the purchase of potatoes for the dining hall. "He was like a great general, who allows no detail of fort, field or camp-life to escape his vigilance."

With amazing versatility and with an expenditure of energy that would have done credit to a stronger man, he toiled unceasingly. The faculty of four was so limited that the president had to carry his full teaching load. We hear that his lectures, which dealt with such matters as sermon making and pastoral care, were interesting and instructive, though as a teacher he had the not uncommon fault of "failing to sympathize sufficiently with the tardy movements of the slower minds." Whether his classroom contacts were stimulating or not,t he very aspect and bearing of the teacher were an inspiration.

He had a massive head, on a short an unimpressive body. Incessant labor had stored that brain with learning in many fields, learning which his powerful and orderly mind was constantly turning to useful ends. He was no recluse. Outside his study he was friendly, sympathetic and genial in his intercourse with professors, students and others, a lovable companion.

Yet one did not have to know him intimately to discover that all he had and was, he had consecrated to the service of his fellows. He could conceive of no greater service to the Christian Church than the training of ministers of the Gospel of his Lord. And such was the force of his personality and example that he impressed their stamp indelibly upon the school.

His successors in the presidency for half a century, Nadal, Foster, Hurst, Buttz, were his personal friends. Some had been his pupils, others were his appointees. One and all they held his name in veneration and labored to carry forward the enterprise which he had so wisely planned. Thus a leadership which, measured by the calendar, lasted but three years, in fact has never ceased.

Reproduced from The Teachers of Drew, 1867-9142, A Commemorative Volume issued on the occasion of the 75th Anniversary of the Founding of Drew Theological Seminary, October 15, 1942. Edited by James Richard Joy. (Drew University, Madison, N.J., 1942)