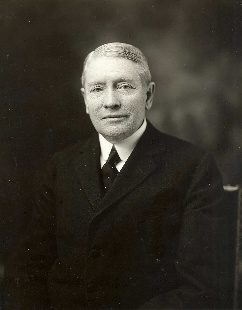 Tipple had something of the mien and manner of a country squire, (which, it may be said, was the way his intimates pronounced his middle name). It came to him together with certain life-trends, from his maternal grandsire, "itinerant preacher, and gentleman of the old school, the Rev. Ezra S. Squier," who was a minister of the old Black River Conference. Ater working his way through Syracuse University, this ambitious youth entered Drew - and from that hour Drew entered and possessed him. The "Big Five" - Buttz, Crooks, Strong, Upham, Miley - were the faculty, and what a faculty!

He left school to become a preacher of the Gospel, with a marked gift for managing men and institutions. It did not take many years of pastoral service in New York City for him to win the confidence of the remarkable group of great-hearted laymen who were then influential in Conference affairs. They recognized executive gifts, even in the garb of a parson. They set him the heavy tasks of organization and finance - and backed him. When he succeeded they opened to him fresh opportunities.

Thus in 1905 he came back to Drew Forest as professor of Practical Theology, the chair of the sage McClintock, the suave Kidder and the salty Upham. Though not a pedagogue by training or by choice, his experience among men as pastor and as fellow-worker in large Christian enterprises had put his own theology to practice, and supplied him with first-hand teaching material. He loved young men and was determined to help them. Seven years later, when [Henry Anson Buttz retired, his mantle fell on Professor Tipple, who had meanwhile broadened his outlook by extensive foreign travel, and whose pen had produced a number of valuable books, such as The Heart of Asbury's Journal, The Life of Francis Asbury and Some Country Parishes. Although he continued to give the courses in his department, the development of the Seminary increasingly absorbed his attention, and relegated classroom work to a secondary place.

As an executive and builder he was at his best. Although his eye was centered on the main objective, the training of ministers, he recognized that classroom and library were not the whole of it. A lover of art and a firm believer in the cultural value of beauty in all its expressions, he set about the making of Drew Forest the lovely place for which it was adapted by nature and art. The trees, flowers and paths received his special care. The Bowne Memorial Gateway dignified the main entrance, and, facing the portal and "the long road," Mr. Pilling erected the equestrian statue of the Bishop Asbury, the field-marshal of the circuit-riders. The friends who had stod by him in his New York days, and who had shared in the prosperity of the time, were drawn into the Drew circle and new buildings and new endowments began to give fresh evidence of their liberal cooperation in the president's plans. The faculty was expanded, new schools were added, and representative men were brought from far and near to lecture on subjects outside the curriculum, but closely related to a modern ministry which must understand and influence all sorts and conditions of men.

His friendship, long continued and closely knit, with three of the finest and foremost Methodist ministers of his generation, Bishop William Fraser McDowell, Dr. Frank Mason North, and Dr. William Ingraham Haven, was a rich resource both for him and for the Seminary. As the older teachers retired he filled their places with men of rare gifts and graces, who gave themselves with the enthusiasm to the carrying out of the president's program.

When two former parishioners, the Baldwin brothers, broached their design for a liberal arts college on the Drew campus, the president adopted it eagerly and threw the great weight of his personality in its favor. So Brothers College started on its promising career, and Drew began to bear the title of University, to which it had always been entitled by the terms of its Charter

It is impossible to think or write about Dr. Tipple's administration without recalling the part which Mrs. Tipple played in it all. She was as charming a hostess as ever graced a presidential mansion. No one could enter her door without becoming her admirer. What this Christian woman's influence must have contributed to some of her husband's greatest successes can not be set down in cold type. When the rich Wendel-Swope legacies were announced, they were variously accounted for, and doubtless many factors contributed to produce their munificence. But not the least was the assiduous and welcome attention which the president and the first lady of Drew Forest gave to the maintenance of the cordial relations between Drew and the Wendels, which had existed from the time when Dr. McClintock and Robert Sinks Foster__Dr. Foster had been their pastors, and when Dr. Buttz was one of the few privileged visitors at "the house of mystery" at the corner of Fifth Avenue and 39th Street.

and the Rose benefactions, the Rose Memorial Library and the scholarship foundation which is helping so many deserving young men to gain an education in the Seminary and in the College are directly traceable to the friendly relations which existed so long between Mr. and Mrs. Lenox Rose and their friends and neighbors in the presidential manse. It has been well said that President Tipple gave, not merely his best, but his all to Drew. His wife, no less. He did not over estimate her value to him, when he dedicated one of his books: "To Her, whose brightness shortens every journey, whose enthusiasm glorifies every scene, whose comradeship makes the whole world beautiful."