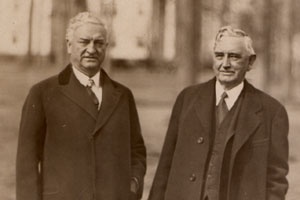 Arthur and Leonard Baldwin, two brothers who grew up on a farm in the nineteenth century and went on to become very successful lawyers, made a donation to Drew that forever changed the small Theological Seminary into a university. Leonard, a Drew trustee since 1917, and Arthur had a friendly relationship with President Tipple, whom they surprised in 1928 with their enthusiasm to endow a liberal arts college at Drew. They donated $1.5 million for the building and endowment of Brothers College (this required a name change of Drew Theological Seminary to the more encompassing Drew University). Leonard Baldwin died in 1933, followed by Arthur in 1939. In the 1950s, Brothers College became known as the College of Liberal Arts.