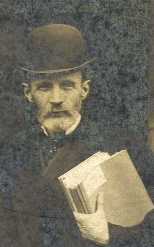 Olin Curtis came to Drew in 1896 as professor of church history, from Boston University School of Theology.

Few men can ever have taught the Christian doctrines as they were taught at Drew for twenty years by Olin Alfred Curtis. Classes in Systematic Theology are not regarded in most seminaries as especially exciting occasions, but there was no lack of excitement in classes where this master-teacher was in charge. He was spare of frame, and his health was never robust, but he was charged with an intellectual and spiritual energy which on occasion was almost irresistible. Speech would sometimes come from him with the tempestuous onrush of a mountain torrent, but he could also conduct a classroom recitation with quiet restraint. Both characteristics were seen in conjunction in his famous Martensen seminar. For a little while, his uncanny power of analysis of the subject presented would suggest a mind completely detached and objective, and then that same mind was likely to come to a sudden glow-- "fused with the inert stuff"-- and note-taking became both impossible and unnecessary under the devastating onslaught or the impassioned advocacy that followed. Often, at the close of one of his characteristic outbursts, the class remained for moments in perfect silence, and then filed out of the room as men should who for a little while had seen the veil rent asunder and the Holy of Holies authentically disclosed.

There are men still living who will declare that nobody ever made things divine more real to them than did Dr. Curtis. His power to do this was no accident. By great tribulation he had entered into the Kingdom. He had known disappointment, bereavement, misunderstanding. He had wrestled in the deep places, and the marks of it were on him. He had, there is good reason to believe, a sense of growing loneliness of spirit in a world, even in a church, to which he seemed at many points an extremist. But if ever a man believed that nothing mattered except the offering of a complete testimony to Jesus Christ, that man was Dr. Curtis. He believed that it had been given to him to see the Christian faith as that total organism of fact and truth which answered to existence as the concave answers to the convex. That being the case, he must tell what he saw; he must tell the meaning of it; he must make clear its overwhelming majesty; he must set forth its significance as the promise of a possible complete and everlasting redemption for every human soul.

The life that came to so sharp a Christian focus was, however, a many-sided life. Everything human interested Dr. Curtis, and everything in the world around him. His passion for baseball was perpetual surprise to people who supposed that a theologian lived in a world of abstractions! He knew the average of the great batters and pitchers, and a World Series found him as enthusiastic as a boy. A baseball game, he declared, confirmed and illustrated his fundamental philosophy of personality as individual-- social! Besides, baseball was so distinctively an American game. The crowd in Times Square, New York, on election night, fascinated him: he loved to be a part of it. He despised no man, because he saw in every man-- a man! He understood equally John Brown and Robert E. Lee: both alike represented the moral finality of motive. One of his intimates was "Old John," a colored workman on the Drew campus, born in slavery, "salt as life," and of an antiquity so great it had become a legend. He had a patriotism that ran deep and strong. Few men studied Lincoln as Dr. Curtis studied him, and few men not professional historians, could have had a more complete grasp of the movement of American history. Frail of health as he was, he served as a volunteer navy chaplain during the Spanish-American War. He was a great admirer of Theodore Roosevelt, and followed him into the "Bull Moose" party.

The mountains, in particular the White Mountains, were his familiar friends, and he wrote of them as not many have done. His descriptions of the song of the hermit thrush ought to be in the American Classics. The very trees spoke to him, and he would tell you what they said. One mornin in the early spring he and Mrs. Curtis were seen apparently playing hide-and-seek on the campus: it was learned that they were searching in friendly rivalry for the first hepatica. When his health failed, and he retired, he began the culture of roses in his little garden, and acquired an expert knowledge of the process. He was a lover of great music, and could interpret its message as though it were a language.

There was a curious catholicity about Dr. Curtis' reading. He was scholarly, but never scholastic. His style was as distinctive as Carlyle's, but much more flexible. He possesse an astonishing amount of out-of-the-way literary and historical knowledge. He was well-read in German theology. He made a study of the great modern preachers, and if they were doctrinal preachers, so much the better: for that reason, he placed Liddon, Dale and Bushnell above Brooks, Matheson, and Horton. He exhorted his students to read the great classical novels, and he was equally insistent that they read the classics of devotion. His library, however, was never allowed to get very large. Books that ceased to interest him were quickly disposed of-- perhaps given to Dr. Faulkner ! On the other hand, he made a practice of having books for which he had a high regard rebound in leather. Bryce, The American Commonwealth,  the Institutes of John Calvin, Harnack, A History of Dogma, and Cary's translation of The Divine Comedy of Dante, were so treated.

Great in mind, great in heart, great in personal character, great in Christian devotion-- this was Olin Alfred Curtis. In his bones was a burning fire, and he could not forbear. The evangelist's passion for souls was upon him. Like his beloved Browning, he was ever a preacher, but he was a priest as well. His class was never just a class: he sharply individualized every member of it. A student in trouble found in him an instant friend. He loved Drew. He loved the campus. He loved the traditions of the place. He loved the students. He loved his work. He loved his native land. He loved the great and the good of all times. He loved beauty and sincerity wherever he saw them, and just as intensely he hated all evil, all pretense, all injustice, all exploiting of man by man. But over and above all else he loved his Lord, loved him as the Eternal Son of God made man to suffer and die for the salvation of Olin Alfred Curtis, and consequently for every other soul. And there be those living and dead who love their Lord the better because they marked the so great love which inspired and sustained the unforgettable man.

The Christian Faith Personally Given in a System of Doctrine, 1905