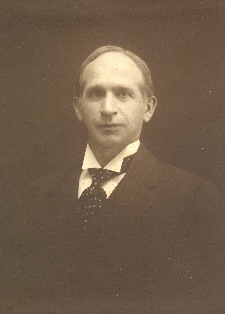 Charles Fremont Sitterly began his career at Drew in 1892 as assistant to the president. He had completed a Ph.D. from Syracuse University in 1885 and pursued further study at Drew in 1886. In 1891, Sitterly married President Buttz's daughter, Julia, and he stayed at Drew as adjunct professor. In 1895, he was appointed full professorship in Biblical literature and Exegesis of the English Bible. Sitterly retired in 1935. Three years later he published a history of Drew titled The Building of Drew University.

In 1892 a young preacher who had been pastor of the Methodist Church in Madison and had taken his bachelor's and doctoral degrees at Syracuse University and his B.D. at Drew was elected to a new post-the adjunct professorship of New Testament Greek and Exegesis of the English Bible. He had been preparing himself diligently for his work for several years. He had been one of Dr. Crooks' most promising pupils, and had twice won the fellowships for foreign study which had just been established. Thus he had enjoyed a year at Oxford and another in Germany all these advantages when such opportunities were almost unprecedented in the Methodist educational world.

In 1891 he was married to Julia Cobb Buttz, the daughter of President Buttz, and a few months later the young couple set up their lares and penates on the campus which was to be his home and the scene of his varied activities for more than forty years. For he not only gave strict attention to his courses and to the related studies, which bore fruit in several publications, but served as secretary of the Faculty, 1895-1935, and as the president's utility man. He was always liable to be called upon in emergencies for all sorts of teaching or administrative service outside his special field. Wholesouled in his devotion to Drew and to its president, he accepted these assignments, whatever they might be, without hesitation, though at times they must have seriously interrupted his own designs for building up his department.

But Dr. Sitterly practised one activity with which no outside assignment could ever interfere. That was his close sympathy with the hard beset individual student and his problems, both educational and personal. The entering junior was quick to recognize that the man to go to for advice and friendly guidance was Dr. Sitterly. There were some of the "Five Demigods" to whom he might have hesitated to open his heart, and there were other barriers, probably unintentional or even imagined, which seemed to surround other teachers. But the door to Dr. Sitterly's heart always stood ajar. Many a young man whom he helped over the hard places would confess to a peculiarly tender feeling toward him for assistance which a perplexed youth can not glean from text-books or the most erudite lectures. It is no reflection upon otehrs or upon his own pedagogic skill, if we place emphasis on this man's Christian brotherliness as his best contribution to the common life in Drew Forest.

In a generation which produced such stalwarts as Ezra Squier Tipple , William F. Anderson, Hebert Welch, John L. Nuelsen, and many others, none rated stronger than he. While these won many or all of their laurels off the campus, this promising young man really never left Drew Forest, except for graduate study abroad. His name is bracketed with that of Horace Lincoln Jacobs as holder of one of the first fellowships granted by the seminary for graduate study. Thus he was the first of a line of students who went from Drew to the British and German universities for advanced work. On that long roll of honor one may read such shining names of John L. Nuelsen, Frederick Carl Eiselen, William H. McMaster, Edwin Lewis, Clement D. Rockey, Fred G. Holloway and Malcolm S. Pitt.

There were no dull moments in Professor Sitterly's classes. He abominated the attitude of smug complacency and the willingness to use trite phrases to express age-old but ever-living truths. New students, and old as well, were often shocked by some unconventional putting of a Scriptural passage which the student was translating in a dull, commonplace way. Woe to him who tried to bluff, when unprepared! "I don't know" or "Not prepared," met with a more sympathetic respone from the teacher.

"I do not know, professor."

"Correct. Thank you. Nobody knows" was Dr. Sitterly's prompt comment.

No one on the faculty knew quite so much about the weaknesses and the strong points of individual students as he. He could have filled the chair of Practical Theology with great success, had he chosen to devote his teaching career to the practical rather than to the Biblical field. Apparently he could never quite divest himself of that "cure of souls" to which he had pledged himself when he was ordained a minister of Christ.

Professor Sitterly has had a genius for growing young, rather than for growing old. Perhaps his zest for new truths and for new ways of stating old truths has played a part in this. His zeal for archaeological research has increased with the years. President Tipple often spoke to his successor about his loyalty and helpfulness. When a restudy of the curriculum was made in 1929-30, no member of the faculty was more interested or more sympathetic toward the experiments which the revision contemplated than this senior member, who might have been disposed to criticise such innovations.

Dr. Sitterly's membership in learned societies and the excellence of his published work are evidence of the extent and accuracy of his scholarship, while his latest volume, The Building of Drew University, gathers up with scrupulous care the details of his Alma Mater's history and tells her story with becoming modesty and with the fine loyalty which has characterized his every thought and action since the day, now well-nigh sixty years ago, when he signed the student roll as a member of the Class of 1886.

Sitterly passed away on November 8, 1943. Sitterly House, which currently houses the English Department and "The Other End," was named after him. Also see his collection of materials: http://www.drew.edu/depts/library.aspx?id=6477.