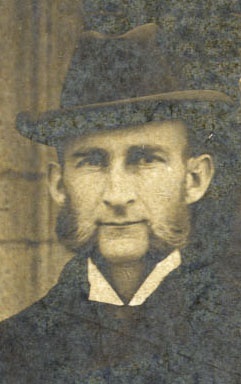 Robert William Rogers arrived at Drew in 1893 to fill the chair in exegetical theology. He had received his B.A. from the University of Pennsylvania in 1886, a second B.A. from Johns Hopkins, and a Ph.D. from Haverford in 1890, as well as other earned and honorary degrees. Rogers had an international reputation for scholarship and he remained a distinguished faculty member at Drew for thirty-six years. He died in 1930.

Robert Rogers was a tall, slender, sharp-featured, thin-lipped schoolman and came into the Drew faculty just as the hoary patriarch, James Strong, was succumbing to the infirmities of age. It marked the beginning of a new era. The "Big Five," who had reigned in the Forest for a quarter of a century, was breaking up. The novus homo had a promising pedigree, biologically and academically. The Rogers family was already remarkable for the number of educators on its rolls. The latest-and greatest-showed an awakened interest in the study of Hebrew when a mere boy in Philadelphia. This is Dr. Rogers' account of the incident which determined his course of life. Though the story has been told before, it must be told again and again, and in his own words:

"When I was a boy, not yet 15, I read in Self-Culture, a volume by Prof. John Stuart Blackie of Edinburgh, that Job in the Old Testament was the greatest book in all literature. I determined to read it for myself, and can remember to this day the Sunday afternoon when I lay on the floor in my father's house and read the book of Job through to the end. There was much that was beyond me, and that a second and third reading failed to clear up. Someone told me that what I needed was a commentary. So I went to Leary's second hand bookstore and bought Lange's learned Commentary on Job. But I had not read very far in it before I came against words from the Hebrew with which of course I could not nothing. Undismayed I sought help from the neighboring Lutheran minister. This man admitted that he had lost all the Hebrew he had ever had, but loaned me his grammar, lexicon and Old Testament in Hebrew. With these tools I set to work to find out what was in the book of Job, that made the great Edinburgh proefssor characterize it as the greatest literary production of ages. Strange that I should have begun my study of the Bible at Job instead of Genesis, but so it happened! Well, I kept at it, studying Hebrew by myself while I was preparing for college, and by the time I was ready to enter, I knew as much of Hebrew as of Latin and Greek-and I might add that I received the prize for the best entrance paper in Latin.

"From those beginnings on that Sunday afternoon when I lay on the floor, trying to comprehend the book of Job, I can trace the whole course of my life and studies. That was fifty years ago. I have never strayed from that line. My whole activity as a student has been concerned with the study of Hebrew and the related languages and the life and literature of the peoples who spoke those languages."

The boy was indeed father of the man. Hungry for learning, he was always seeking it wherever there were stores of it in the Old World. When found and mastered, he put it to service for mankind in the form of books which were true to the existing state of knowledge, and yet expressed in language which the general public could understand and with which the most learned could find no fault. This gift of presenting the results of his own and others' researches into the ancient past in such form as to engage the attention of the public made his lectures on Assyriology as fascinating as a tale of adventure. Not only university audiences, but pastors in Annual Conferences, and much more miscellaneous groups, listened eagerly as the dim figures of the past moved before them in color, action and life under the magic touch of the master.

Robert Rogers' graduation at the University of Pennsylvania was only the beginning. He had heard of a new fountain of knowledge, and promptly joined the select body of ambitious young scholars who flocked to Johns Hopkins for advanced study. Before he was 26 he had been teaching the Biblical languages and Semitic history at Haverford and Dickinson. Not yet 30, he was nominated with others for the chair which Dr. Strong had filled since 1868, and-wonder of wonders!-he was elected over the veteran nominees.

Within two years he was off for Germany to delve deeper into things Semitic. There he earned his doctorate at Leipzig, possibly the first Methodist to qualify in that renowned center of learning. Later he found Oxford more congenial, and became a familiar figure in the Bodleian; St. John's College elected him a life member, and he spent many summers in its cloisters. These summer sojourns were not vacations! British Orientalists began to recognize that this young American scholar was an indefatigable worker, and that he had set himself certain definite and heavy literary tasks for which he was preparing.

His books on Oriental history began to attract attention on both sides of the Atlantic. He was elected to learned societies, invited to lecture at Harvard, Princeton and Columbia, and honored with the degree of Doctor of Literature by the University of Dublin and-most prized of all his honors-by Oxford, where he was regarded as an adopted son. Dr. Sayce, the Oxford Savant, admitted him to the circle of his personal friends, and visited him at his home in Drew Forest.

But it was Drew-not Oxford-that outranked everything in "The Rabbi's" enthusiasms. Everything that could be done to reproduce in his students the romantic interest in the studies which possessed him he did with all his might and main. When it became apparent that interest in the study of Hebrew was definitely on the wane among the students, the fact was to him inexplicable. And when the subject was actually dropped from the prescribed courses of study at the seminary he felt that the glory had indeed departed. No amount of instruction in Comparative Religions, or the Social Implications and Applications of the Gospel, or even The Christian Criticism of Life seemed to him to outweigh in their importance and value to the future minister the identical words which fell from the lips of the Hebrew sages, prophets, priests and kings.

He could never be persuaded that the change was for the better, and he continued to offer his courses in the Semitic languages long after their popularity-such as it was-had ceased. The boys knew the "Rabbi" didn't like it, but they were proud of the "Rabbi" just the same. Possible it was the fact that they no longer had to take his Hebrew under compulsion, that saved the day for him. As the years rolled by he too had become an institution, and the students glories in him, Hebrew or no Hebrew. With his senior colleague, the president, he had inherited much of the respect, not to say the awe, with which a previous generation had universally regarded the "Big Five." For no one could forget that in the modest scholar the Seminary possessed a man whose work had made the name of Drew known wherever pure learning was honored.

His last years were shadowed by a painful and progressive illness, which aged him prematurely and for which no relief could be found. When he could no longer meet his classes and must forego his annual visits to Oxford, he asked for release from the chair which he had occupied with his distinction for 36 years, eleven more than the tenure of his predecessor, Dr. Strong. It was hoped that a period of restful retirement on his Pennsylvania farm would prolong his life and enable him to resume his activities in some degree. The trustees continued him as a professor emeritus and lecturer on the History of the Ancient Orient. But his sun was setting. The loving care of his wife, who did not long survive him, ministered to him tenderly in the closing months, and he was mightily cheered by the knowledge that their son and daughter were following his footsteps as tireless scholars and inspiring teachers.